RANGE ROVER EVOQUE | REGIONAL DEBUT IN ALI F. MOSTAFA’S FILM ‘FROM A TO B’

WATCH THE FILM
GET DIRECTIONS As filming wraps on Ali F. Mostafa’s latest feature film ‘From A to B’, Land Rover MENA has revealed the Range Rover Evoque is making its regional debut as the ‘4th star’ in the Emirati director’s much anticipated road trip movie.

Land Rover vehicles are no stranger to the silver screen, having featured in many iconic films including Skyfall, but ‘From A to B’ will be the first time a Land Rover stars in a regional feature film.

Land Rover MENA began its relationship with ‘City of Life’ creator Mostafa in 2011, when he was asked to become a regional ambassador for the Range Rover Evoque, the smallest, lightest, most fuel-efficient Range Rover ever produced, leading to a phenomenally successful launch in the region. The partnership, which goes beyond traditional ambassadorships, also saw Land Rover harnessing Ali’s unique creativity, style and film-making expertise to create Classified, a thrilling online film series, which starred the Range Rover Evoque.

In 2012, Land Rover announced the extension of its partnership with Mostafa for a further three years, culminating in a special announcement at the 2013 Cannes Film Festival revealing the Range Rover Evoque will be featured in ‘From A to B’. 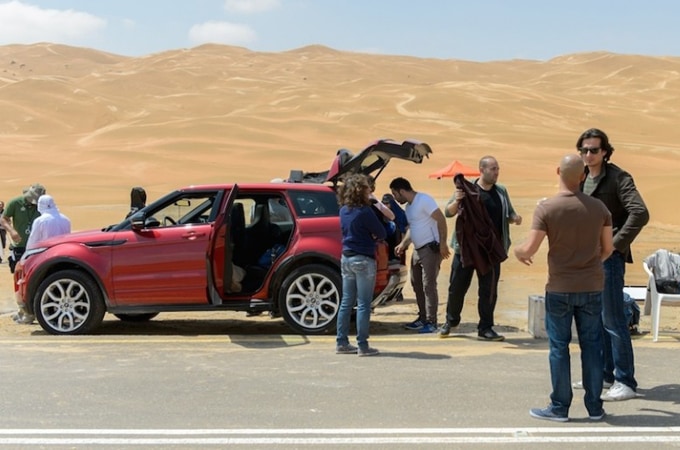 Fast forward to 2014, and the Range Rover Evoque has once again proven it has star quality, with an integral role in ‘From A to B’, transporting the three lead characters on their road trip from Abu Dhabi to Beirut, featuring a number of misadventures on the way. Starring alongside the Range Rover Evoque are Saudi stand-up comedian and social media star Fahad Albutairi, Egyptian actor Shadi Alfons, and Syrian actor Fadi Rifaai, all of whom are making their film debuts in ‘From A to B’.

Commenting on the news, Bruce Robertson, Managing Director for Jaguar Land Rover MENA said: “Our partnership with Ali F. Mostafa played a major role in the phenomenally successful launch of the Range Rover Evoque here in the MENA region, and I’m proud to say our collaboration is now in its fourth year. We have always looked beyond traditional product placement – our goal is to create genuinely compelling content that engages our audience – we started this with Classified, and ‘From A to B’ takes this one step further, featuring the Range Rover Evoque as a 4th character with an integral role in the storyline.”

Added Ali F. Mostafa: “Shooting ‘From A to B’ has really been a labour of love, and a long time in the making. Having collaborated with Land Rover MENA for a number of years, I knew the Range Rover Evoque was the perfect choice to transport the three friends on a diversely rough terrain across the region. I hope that with this movie, we can prove that product placement can be used in a subtle way to enhance the overall storyline without being overly commercial.”

’From A to B’ is co-produced in partnership by twofour54 and Image Nation Abu Dhabi and is slated for release at the end of the year.